The eMedMed Project was born in the wake of the creation of the Mediterranean Platform of e-Services, validated by the UN during the ECOSOC Ministerial Review. It was presented during the First Economic Forum of the Western Mediterranean in 2013 by the Italian vice-minister of the Foreign Affairs Lapo Pistelli to the Union for the Mediterranean General Secretary Sijilmassi.

Recently it has been positively discussed at the UfM with Ambassador Borione, UfM General Secretary of Social and Civil Affairs and Prof. Chet, UfM Israeli Delegate. 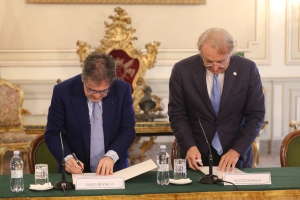 EMedMed was then validated at the XVI Infopoverty World Conference held at UNHQ in New York in April 2016.

The eMedMed project aims at providing e-services through an innovative platform system that links main, local and peripheral hubs, overcoming a large amount of healthcare problems, such as malnutrition, obesity, and the chronic diseases brought on by sedentary lifestyles and tobacco smoking. Moreover, the project is specifically devoted to face the health security challenges that the migrant emergency is provoking.

Fully aware of the fact that the potential of digital services in the field of education and healthcare is still largely unexploited and that it would be a fundamental catalyst in the economic and social development of the Southern Mediterranean shore, the eMedMed project will use Information and Communication Technologies (ICTs) to solve healthcare gaps afflicting these countries.

The area of intervention of the eMedMed project is the Southern Mediterranean shore. In particular, it will be implemented in Egypt, Libya, Morocco and Tunisia. The partner hospitals that will act as “Local Hubs” for the Project are the following:

The main tasks are:

The eMedMed Project will address four tiers of beneficiaries:

The program has been developed by OCCAM in partnership with IITM, the International Institute of Tele-Medicine, an independent scientific and technological structure involved in research, development and  transfer of ICT projects and initiatives in medicine and healthcare.

In the framework of the eMedMed project, during the XXI Euro-mediterranean Conference is was also decided to launch a Mediterranean Master of Telemedicine, together with the universities of the Mediterranean Basin, in order to train homogeneously the medical and paramedic staff, whose preliminary study will be assigned to the professors Hassan Ghazal (University of Rabat),  Francesco Basile  (University of Catania), and Francesco Sicurello (University of Milano Bicocca). 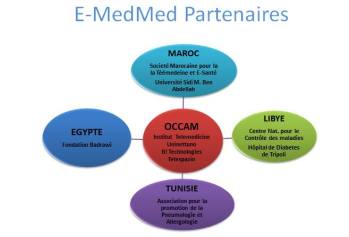